Posted on December 15, 2020 by thegoodbadbook 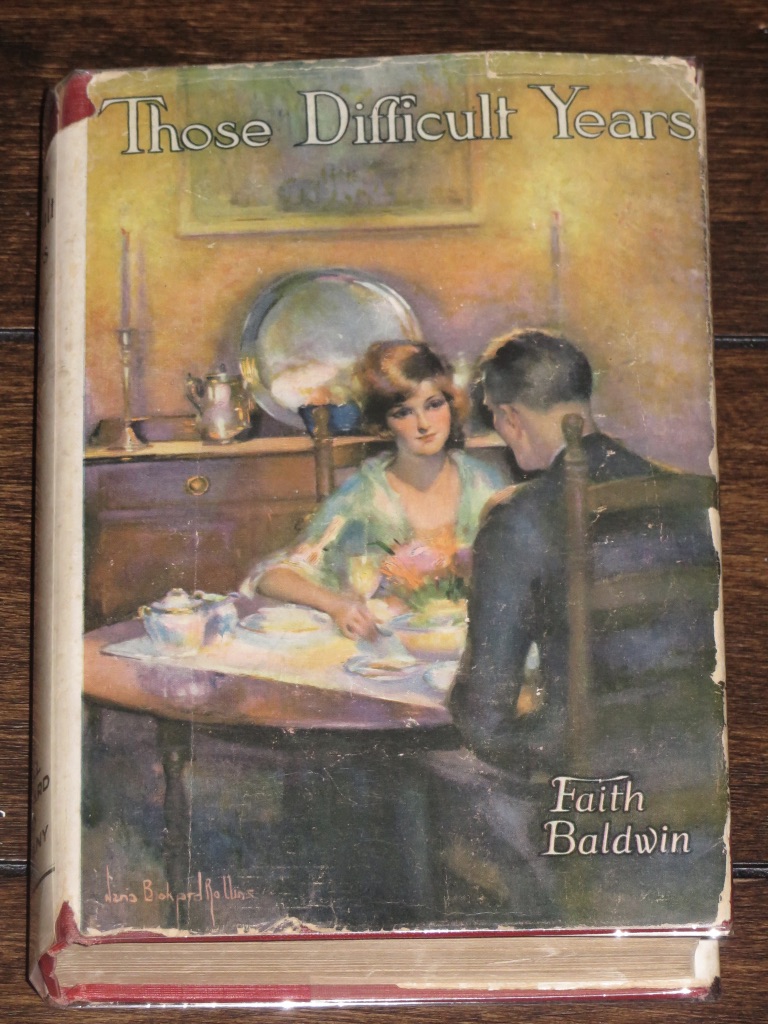 An early Faith Baldwin novel about the marriage of a librarian who grew up in Michigan?  Yes, although it’s worth noting that Leslie, the protagonist, quits her job shortly before getting married.

Faith Baldwin is one of the most famous and prolific romance novelists of the era I collect.  This blog has covered her work before, but not since 2013, and other blogs have written really great posts about her in the intervening years.  I strongly recommend checking out The American Past: NYC in Focus’ post on “Faith Baldwin of Brooklyn” as well as The New Antiquarian’s post on “Collecting Faith Baldwin.”

Those Difficult Years by Faith Baldwin was published in 1925 by Small, Maynard & Company, and the cover art is signed by Nana Bickford Rollins.  As of this writing, this is the only Nana B. Rollins dust jacket in my collection.  Most of what a cursory internet search for Rollins brought up was greeting card art, some of which was rather religious.  And of course, I always feel it’s worth mentioning that this ninety-five year-old first edition novel with its dust jacket in such great condition came from Yesterday’s Gallery and Babylon Revisited Rare Books.

Those Difficult Years opens with the neighbors of Tom and Leslie Haddon preparing the Haddon home and welcoming the newly married couple back from their honeymoon.  The Haddons are greeted by a joyous crowd on the train station platform, and return home to find their house full of food and presents.  This opening sets the homey tone of the novel, which is set in a small town in New England.

For a book literally titled Those Difficult Years, this is really a wholesome and uplifting novel.  Various chapters present episodic struggles, but the main characters and their families all love each other and form a community.  Financial struggles are about Leslie struggling to balance a checkbook, but the Haddons employ a cook, a gardener, and eventually a visiting nurse for their son.  At one family gathering, Leslie’s cousin Ruth ponders what I consider to be the central theme of the novel, “It’s just love and family and threads that interweave.  Dull and commonplace and real,” (196).

One narrative thread involves Leslie’s family.  Her cousin Ruth, a successful interior decorator in NYC, suffers from a heartbreak and comes to the Haddons’ to recuperate.  She likes staying in town so much that she extends her stay, rents a home, and invites her Aunt Della in from Detroit.  Aunt Della’s response reads, “may I bring cat” and Bubbles the haughty cat joins the story, but I digress.  While Ruth is in town, Leslie decides to set her up with Tom’s business partner, Amos Allen.  Ruth and Amos clash on their original meeting, and argue about one of Faith Baldwin’s continuing topics of concern:  women with a profession entering matrimony.

The entire exchange between Ruth and Amos is on pages 103-107.  It really does set the stage for several of Baldwin’s subsequent novels, and was a personal subject matter for the author.  From Amos, “if [a woman] loves a man enough to marry him she will love him enough to exchange the swivel chair of authority for the needle and cotton.”  Ruth responds, “the business woman is thoroughly equipped to be her husband’s companion.  The parasite woman is not, even if she can darn socks properly.”  The argument continues and then Amos concedes that some women could continue working after marriage, notably writers (ahem, Faith Baldwin) and artists, especially since they are able to create at home.  A bit more than a hundred pages later, Ruth sacrifices her career and life in NYC to marry Amos.

Baldwin also touches upon pregnancy-related anxieties and the difficulty of caring for a newborn.  Other storylines include seeing the good in everyone despite rumors of their past, weekly visits with the in-laws, Tom falling ill with measles (!), and eventually the passage of time.  The narrative arc of Those Difficult Years isn’t so much a set of defined challenges within the first years of marriage where the main characters learn a lesson or two (e.g. The Love Debt or Younger Sister) but rather a slower progression of life events.

Something I missed until around the final hundred pages is that Those Difficult Years isn’t set in 1925 but rather a span of years around 1910-ish.  However, one of the neighborhood children makes a reference to silent film star Norma Talmadge (page 255) when she would have been nearly completely unknown.  Shortly after that, at which point several years have passed since the beginning of the story, it is mentioned that the current year is 1911.  So was the film reference incongruous with the novel’s setting, or was the reveal that the novel was slowly leading up to the outbreak of World War I a last minute addition?

Speaking of long spans of years and time, this story of Tom and Leslie Haddon’s marriage, published in 1925, will finally be entering public domain on January 1, 2021.  Most everyone is likely going to be all about The Great Gatsby when the 1925 copyrights expire, but don’t let him hog the spotlight!  Several important romances of the era, including The Flapper Wife by Beatrice Burton and Chickie by Elenore Meherin are also 1925 publications.  In fact, on January 1, 2021, for the first time, every single title listed in American Fiction, 1901-1925: A Bibliography by Geoffrey D. Smith will be in the public domain!  (Those Difficult Years is listed in that bibliography, and its citation is Smith B-112.)

Copies of Faith Baldwin’s works are available for purchase here.

This entry was posted in 1920s, Faith Baldwin, Small Maynard and Company. Bookmark the permalink.

3 Responses to Those Difficult Years