Posted on October 22, 2019 by thegoodbadbook 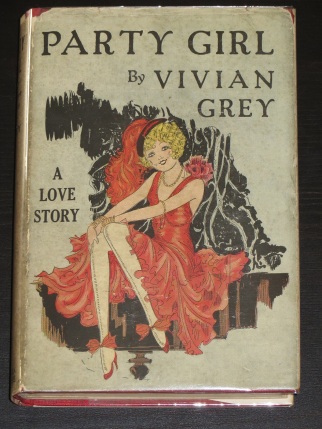 Oh, Party Girl.  Come for the silly title, stay for the (unsatisfying) discussion of double standards and the modern women’s experience.  Also, for those of us who like Midwestern settings, Party Girl takes place in Terre Haute, Indiana!

Party Girl: a Love Story is a Chelsea House publication.  Chelsea House printed many excellent fiction works, usually subtitled, “An Adventure Story,” or “A Detective Story,” or “A Love Story,” or “A Western Story.”  Since I collect romance novels, I look for the “A Love Story” titles exclusively, and I’ve found them to be more difficult to locate than the Grosset and Dunlap first edition fiction.  A grand total of one library lists this book in OCLC.  Like the Grosset and Dunlap titles, many of the Chelsea House novels have been serially published.  The copyright page of Party Girl only mentions “1929,” but after a little big of digging, I’ve found that the wonderful FictionMags Index Family lists that Party Girl was serially published in the pulp Love Story Magazine (Street & Smith Corporation) starting in v. 67 #1, dated September 28, 1929, weeks before the stock market crashed.  The index also mentions that “Vivian Grey” is a pseudonym for Harry Walter Anderson, although I haven’t been able to find evidence of that in the Library of Congress Name Authority Records.

The basic premise of Party Girl is that Carol “Melody” Sprague returns home late one night with Kent Mayburn, is refused entrance to her home by her father who is sick of her late night adventures, then Kent Mayburn pronounces that he could never marry a “party girl,” and Melody is left to pick up the pieces.  When she’s refused entrance at home, Melody assumes her beau Kent will marry her immediately, which leads to a painfully awkward interchange.  But no, Kent, who has been out with Melody many late nights, and kissed her many times, declares he’s looking for “the right sort of girl – an old-fashioned girl.”  He rejects Melody because he’s already enjoyed her company, but considers “sweet and shy and never been kissed” to be marriage material.  Kent is the worst.

For any readers wondering what Melody’s “party girl” offenses include, the book does list them!  See if any sound familiar to you… I won’t judge (shame):  “She had been gay, perhaps too gay.  She had danced and flirted, laughed at jokes that perhaps would have been better blushed at.  She had been daring.  She had been the first one to slip out of her dress at Lila Longstreth’s party and dive into the pool in moonlight…  Hers had been the first legs to go stockingless in her crowd.  Her sports dresses were always a bit shorter and more extreme than any of the other girls, and her evening dresses a bit longer and more exotic” (33).

Thoroughly without options, Melody spends one heartbroken night at Kent’s apartment while he goes to a hotel, and then she temporarily moves in with Willie Estabrook.  Willie is a girl-friend of Melody’s who benefitted extensively from Melody’s generosity while she was securing the affections of her husband Tommy, and not to mention his family’s fortune.  Willie has a cold personality and is a minor villain of the book, which I don’t feel is entirely fair.  Sure, she’s not the warmest, most supportive friend, but who wouldn’t be a little exasperated at the house guest who overstays her welcome?  Melody stays at Willie’s for about three weeks without making plans to leave, racks up a huge shopping debt her father refuses, causing creditors to call the Estabrook home, and she also catches the eye of Willie’s brother-in-law, Broddy.  When Willie finally turns Melody out, granted on short notice, Melody reacts by telling Willie they were never really friends to begin with.  Ouch.

During this time, Kent dates and becomes engaged to Agatha, who is several years younger than Melody and presumably more innocent.  Most of the novel is a rehashing of Melody being unable to go home, being heartbroken over Kent, being jealous of Agatha, and then dodging Broddy’s advances.  However, trouble is clearly ahead when one character says of Agatha, “Still water runs deep, baby, and there’s a whole lot of mud at the bottom of it” (129).  It turns out that Agatha had been cheating on Kent with a man twenty years older than her, and asks Melody to take the fall for it when Kent discovers them together.  The truth eventually comes out and Kent and Melody get their happily ever after, but the whole Agatha story line feels like a cop out to me.

At one point, Melody asks her friend Willie, “What’s wrong with me?  I haven’t done anything that the rest of you haven’t done a dozen times” (145).  In a story about double standards and whether or not an experienced man wants a “sweet and shy and never been kissed” wife, it’s a dodge that the character who is supposed to be that role in fact isn’t.  As a 2019 reader, I wanted Kent to realize he loved Melody because he loved Melody, not because Agatha’s a cheater.  Do we get that ending?  Yes and no.  The first time Kent returns to Melody he says to her, “You’re out and aboveboard with everything.  You have kissed more of the fellows than I like to know you have, but it’s out where every one’s seen it.  You haven’t gone to their apartments,” (194-195) and she turns him away.  The time that sticks, Kent instead declares, “I just thought that I wanted that kind of girl [meaning Agatha], but I didn’t… I do know what I want.  I want you and I must have you”  (220).

So, does Kent have his happily ever after with Melody because he’s seen the error of his ways, or because she’s a “good girl” after all, or somewhere in-between?  For 1929, the ambiguity will have to be good enough.  Oh, and Melody’s father also takes her back to complete her happy ending.

Bonus:  It seems worth noting that the male lead character names really threw me off in Party Girl, as they’re nearly identical to Blind Date by Vida Hurst.  In Blind Date, the lead romantic interest is Kenton and the other suitor is Roddy.  At one point in both books (B)roddy even offers to pay off a debt that the main character acquired from an unwise shopping binge.  What book is this again?

Copies of other books published by Chelsea House are available for purchase here.

This entry was posted in 1920s, Chelsea House, Vivian Grey. Bookmark the permalink.